The earliest reference to church bells at St Oswald’s can be found in the arrangements made by Randle Brereton III in 1522 for his funeral.

Also I will that the Parish Clerks shall cause three long peals clashing to be rung with all the bells in the Steeple, except the Saints Bell. The Clerks to be paid for their ringing 4d each.
The Commissioners of Edward VI noted in 1552 that there were, at that time, five bells in the Steeple.
The Churchwarden’s Accounts for 1659 state that for the past five years the Tenor bell had been broken. The Accounts for this year state that the Tenor was recast at Wellington, Shropshire, at a cost of £22-14-11.

Archdeacon Churton recorded the inscriptions on three of the bells in 1800, they read:
The Tenor – [in English] “Sir Randle Brereton Knight Chamberlain of Chester gave this bell 1508”
Number Four – [in Latin] “For his own pleasure created he all things – 1624”
Number Three – [in Latin] “Hail Mary, Full of Grace, the Lord be with thee.” With the Cross of the Sutton Family added. 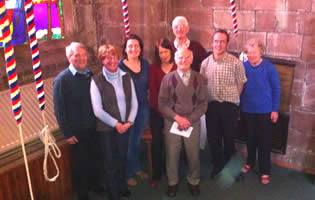 We welcome new members to join our team – come and learn how to ring bells.

R. Johnson and T. Phillips, Churchwardens in 1802, arranged for J. Rudhall of Gloucester to recast the five bells and by adding additional metal – Seven Hundred Weight at 15d per lb – to make a peal of six bells. This was done at a cost of £231-16-6.

In 1904 Taylor’s of Loughborough recast the Tenor once again. At the same time and as a memorial to the Reverend C Wolley Dodd, Number Five was recast.

1914 bells – George and Anne LewisIn 1914, two more bells were added in memory of George (Number Two) and Anne (The new Treble) Lewis. Taylor’s also hung the bells in an iron frame at that time. You can find the memorial to this work on the north wall of the nave (right).
Inscriptions

The inscriptions on the bells now read: 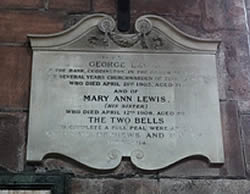